The speakers at the breakfast I attended on Friday were Senate President Codey and Assembly Speaker Roberts. I thanked Speaker Roberts for posting A1563 and prior bill A4354 for a vote in the Assembly - the legislation passed the Assembly unanimously. A few days before I attended this breakfast, I spoke with the Chief of Staff for Senator Jennifer Beck, the Senator from my district who is one of the prime sponsors of the bill. I was told that Senate President Codey informed Senator Beck just the prior week that he would post S1106, the antistalking legislation for a vote. At this breakfast, I thanked Senate President Codey for agreeing to post this critical piece of legislation that will help me and the other victims of stalking who reside in NJ. He told me he was well aware of the need for this legislation, he would absolutely post it and he asked me to have Senator Beck send him a quick reminder to post the bill for a vote. The launch sequence has begun.........countdown to the first Senate voting session on Oct 23rd! Hooray!!!
Posted by Karen at 1:06 PM 1 comment:

The majority of stalking victims do not seek mental health services, despite significant and serious mental health impact.
*- 80% of victims reported increased anxiety
*- 30% of victims developed PTSD
*- 25% of victims considered or attempted suicide
Yet, only 30% of female & 20% of male victims seek psychological counseling.

Sources: National Violence Against Women Survey, Tjaden & Thoennes (1998), Management of Victims of Stalking, Pathe, Mullen, & Purcell (2001) Reasons for not seeking counseling often mirror those for not reporting stalking: shame, embarassment, minimization, etc. Additionally, given the reality that 46 million people in this country do not have health insurance, psychological treatment is simply out of reach for many victims. This should not be a barrier to holding offenders accountable. If it is, offenders may end up targeting victims whom they learn do not have health insurance or cannot afford mental health counseling.
Posted by Karen at 11:44 AM 2 comments: 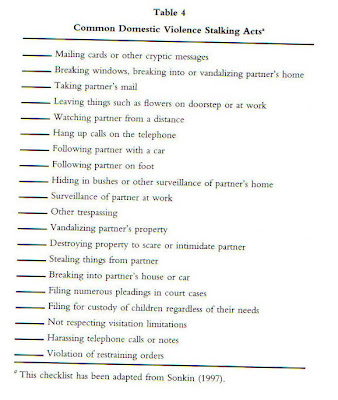 Reprinted to the left is a table listing COMMON DOMESTIC VIOLENCE STALKING ACTS from the book "The Psychology of Stalking; Clinical and Forensic Perspectives" Edited by J. Reid Meloy
Page 148 of the book continues
IDENTIFYING DANGEROUS DOMESTIC VIOLENCE STALKERS
"Gottman et al. (1996) suggested that the most dangerous batterer may not be the one whose rage is out of control, but rather the one whose rage is "quiet', "cold" and totally under his/her control; what Meloy (1988) referred to as "predatory" rather than "affective" violence. This batterer has a mean streak that metes out cruel and vicious acts against his/her ex-partner. It is their need for revenge or vindication that motivates these stalkers. Dysfunctional cognitive thinking propels stalking behavior.

The Senate returns from summer vacation on October 1st. The first Senate voting session will be October 23, 2008. The countdown clock is counting down the days until 10-23 - the first opportunity to post this legislation S1106 A1563 for a vote by the full Senate. The Assembly has already unanimously passed this legislation.
Posted by Karen at 1:59 PM No comments:

With summer ending, everyone is talking about their vacation. 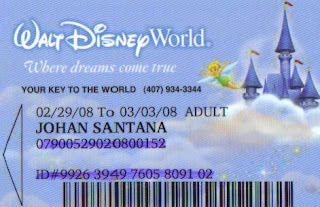 Vacations when you are being stalked - escaping for some much needed R&R - are really not possible but the folks at Disney go out of their way to accommodate your special needs. A few days after testifying for the Assembly Law and Public Safety hearing in Feb 2008, I traveled with my child and close friend and her child to Disney World for the ESPN weekend event. Five hours after our plane landed in Florida, I was receiving phone calls on my cell phone from fax machines all around the state of NJ - area codes 973, 201, 609. The calls were coming ten minutes apart. (If you read the entire testimony below, you will know that on my birthday in Nov of 1998 my stalker found me in Disney World and used the voice changer machine from the slasher movie SCREAM to call my hotel room and sing Happy Birthday - I hung up and he called back. ) We were staying at the Polynesian Resort in 1998 and again in 2008 when the stalker reached out to scare us. I cannot describe for you how terribly disconcerting it is to know that someone is always tracking you and thinking of ways to scare you and ruin your life or spoil your vacation. Thankfully the folks at the front desk at the Polynesian were incredibly accommodating. Upon check in, they suggested we change our names and even printed our new identity on our ID Cards. Since it was ESPN the weekend - we became the Johan Santana family - see photo. They turned off the phone in our hotel room and moved our room as close to the main building as possible. I turned off my cell phone. For the remainder of our long weekend, we were the Santana family - we met our long lost relative Joaquin at the Contemporary Hotel gift shop and the maids thinking Johan was actually in the room asked the kids if their parents were in the room. Six months later, I get materials from Disney addressed to the Santana family. The trip was a blast. You rock Disney!
Posted by Karen at 5:52 PM No comments:

Compare the California Stalking law which was strengthened again in 2008 with the current NJ stalking law adopted in 1992 and amended in 2001. NJ needs the swift passage of A1563 and S1106 - the proposed NJ stalking legislation.

http://www.sdcda.org/protecting/stalking.php
Imagine being pursued - hunted by someone who knows your every move. No matter what you do, you can’t shake them. You look in the rearview mirror and there they are. Panic sets in. You have nowhere to go, nowhere to hide. Welcome to the life of a stalking victim.

Stalking is not a new phenomenon. But widespread recognition of stalking as a social and criminal justice concern is relatively recent. California enacted anti-stalking legislation in 1990, and in 1994 Congress passed the national Violence Against Women Act.

Nationwide, one in 12 women will be victims of stalking at some point in their lives. Men make up a smaller, but equally victimized group.

Stalking cases are unique because they can involve ongoing behavior that can last for years. Often, several police agencies are involved in coordinating the investigation. Victims are among the most emotionally traumatized because of the ongoing and threatening nature of the crime.


Profiles of Stalkers:
THE STALKERS:9.5% Erotomania: Stalker falsely believes that the target, usually someone famous or rich, is in love with the stalker.
43% Love obsession: Stalker is a stranger to the target but is obsessed and mounts a campaign of harassment to make the target aware of the stalker's existence.
47% Simple obsession: Stalker usually male, knows target as an ex-spouse, ex-lover, or former boss, and begins a campaign of harassment.

THREATS
Direct Threats-Straightforward and explicit statements of an intention to commit harm that do no state conditions that might avert harm.
Veiled Threats-Indirect, vague, or subtle statements suggesting potential harm that do not state conditions that might avert harm.
Conditional Threats-Statements portending harm and specifying either conditions to be met in order to avert the harm or conditions under which the threat will be carried out.
Other resources and valuable links about stalking:
National Center for Victims of Crime
Summary of the Violence Against Women Act
Posted by Karen at 9:47 AM No comments: