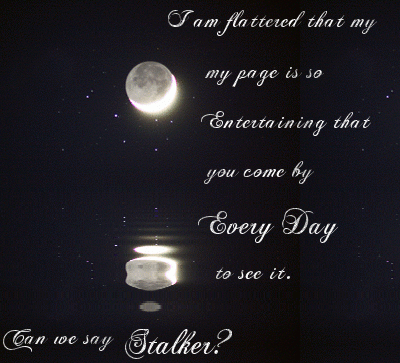 Stalkers Cause Anxiety and Stress - Sometimes for Years
by Kimberly TsaoIt's an ordinary day. You step into a bookstore and start to browse through the shelves. Next thing you know, the feeling of being followed isn't something just in movies anymore - it's real. It's now.A tall, lanky man weaves in and out of the same aisles you do. Then, suddenly, he's not behind you anymore. Coincidence, you think.Huge mistake.You turn to get a closer look at the book titles, and he's right there - peering at you from the other side of the bookshelf. His eyes pierce yours in the space between the top of several books and the shelf above them.
You look away for a second, and your eyes flicker to the children's book, "The Rainbow Fish," an illustration that will be burned in your mind forever, an image that you will flashback to and allow to fester in your mind in the years to follow.Seventy percent of stalking victims fall prey to post-traumatic stress disorder, which can manifest itself into depression, sleep problems and more, according to a 1998 New York Times article.One California woman was stalked for 31 years before the police made an arrest, according to the same New York Times article. That's more than 11,000 days of being stalked, of feeling helpless and afraid.Stalking only became a crime in 1990, according to the same article. One can't help but wonder, what about the centuries and centuries of victims before that?Fifty percent of stalking cases involve violent threats. The stalkers who carry out their threats have been known to hurt their victims' pets or vandalize their victims' properties. As a result, some victims are forced to move, find new jobs and change their identities. In extreme cases, the stalker kills the victim.Unfortunately, the Internet has placed stalking in a whole new arena. Stalkers don't need to constantly dial the victims' phone numbers or drive over to the victims' homes anymore. Cyberstalkers can haunt people from other states and countries.
In a 2002 Christian Science Monitor article, the president of SafetyEd, a group for stalking victims, was quoted as saying, "The majority of police departments, district attorneys and attorneys do not understand (cyberstalking), and the laws do not really protect you from this type of problem."But cyberstalkers usually stop after one visit by the local authorities, according to the same article.
If only all police forces would make that visit.Even if the police were vigilant, there is no profile for your everyday stalker. Stalkers can be psychotic, have a personality disorder or both, according to the New York Times article. They may also be alcoholics or drug addicts.Some people turn into stalkers because they've suffered abuse or abandonment, according to the same article. Other times, the trigger is "a recent loss." But none of them are legitimate excuses. Everyone who is grieving or abusing drugs doesn't necessarily become a stalker.A stalkers register was shut down in 2000, according to a 2005 BBC News article. It would have been akin to a sex offender register. The reasons for scrapping the plan?
"Practical issues and existing monitoring safeguards," according to the same BBC News article. What does that even mean? What could be more practical than keeping tabs on potentially dangerous stalkers? And what "existing safeguards"?The law needs to catch up. Restraining orders, when it comes down to it, are pieces of paper. They don't do much. Fifteen percent of the time, the stalkers remain undeterred, according to a 2007 ABC News article.
One million women and 400,000 men have been the victims of stalking, and one in 20 women will be stalked in her lifetime, according to the New York Times article.To the victims: Persevere.To the law enforcement: Protect and serve.To the stalkers: Get a life.
Posted by Karen at 8:34 PM 2 comments:

It is a frightening trend that is to be addressed by 20/20 .....
Understanding the Batterer in Custody and Visitation Disputes

An article from Lundy Bancroft. Read the entire article here. Here is an except from Mr. Bancroft’s article:
An abuser’s desire for control intensifies as he senses the relationship slipping way from him. He focuses on the debt he feels his victim owes him, and his outrage at her growing independence. (This dynamic is often misread as evidence that batterers have an inordinate “fear of abandonment.”) He is likely to increase his level of intimidation and manipulation at this point; he may, for example, promise to change while simultaneously frightening his victim, including using threats to take custody of the children legally or by kidnapping. Those abusers who accept the end of the relationship can still be dangerous to their victims and children, because of their determination to maintain control over their children and to punish their victims for perceived transgressions. They are also, as we will see later, much more likely than non-batterers to be abusive physically, sexually, and psychologically to their children.

The propensity of a batterer to see his partner as a personal possession commonly extends to his children, helping to explain the overlap between battering and child abuse. He tends, for example, to have an exaggerated reaction when his ex-partner begins a new relationship, refusing to accept that a new man is going to develop a bond with “his” children; this theme is a common one in batterer groups. He may threaten or attack the new partner, make unfounded accusations that the new partner is abusing the children, cut off child support, or file abruptly for custody in order to protect his sole province over his children. A batterer who does file for custody will frequently win, as he has numerous advantages over his partner in custody litigation. These include, 1) his typical ability to afford better representation (often while simultaneously insisting that he has no money with which to pay child support), 2) his marked advantage over his victim in psychological testing, since she is the one who has been traumatized by the abuse, 3) his ability to manipulate custody evaluators to be sympathetic to him, and 4) his ability to manipulate and intimidate the children regarding their statements to the custody evaluator. There is also evidence that gender bias in family courts works to the batterer’s advantage. (Massachusetts Supreme Judicial Court Gender Bias Study) Even if the batterer does not win custody, his attempt can be among the most intimidating acts possible from the victim’s perspective, and can lead to financial ruin for her and her children.

From The National Coalition Against Domestic Violence:
WE DID IT! The ABC News television show 20/20 has heard you loud and clear. They are now considering producing an hour-long story on a MOTHER who has suffered/is suffering from domestic violence and has had a negative experience within the family court system.
This is where YOU come in! If you have a story about a mother whose experience within family court resulted in (1) disbelief of her allegations of abuse and (2) her children being awarded to the abusive father, please submit it to the Public Policy Office no later than November 30, 2008. Be sure to place “ABC Custody Story” in the subject heading of your email or fax. There is no guarantee your story will be chosen. We will inform you of 20/20’s final decision and the show’s air date. Thanks in advance!!! Story Guidelines1. No more than 1 page. If your story is chosen for further review, you can then provide additional details.2. A mother who lost her children to the abusive father because her allegations of abuse (against her or her children) were found not credible.3. Be willing to appear on television. Your identity can be concealed.4. Contact information of the mother.5. Contact information of the story submitter (if you are NOT the mother).6. Submit to publicpolicy@ncadv.org or 202.745.0088 (fax). Please email all questions to publicpolicy@ncadv.org
Posted by Karen at 11:51 PM 3 comments: