Single mother Karen Welch gets a mysterious call on Christmas Eve. At first, she thinks nothing of it? but before long, she's getting dozens of hang-up calls every day. Follow Dr. Michelle Ward through this shocking game of cat and mouse.
Posted by Karen at 8:16 PM No comments:

Wilmington – Delaware Attorney General Beau Biden and Maine Attorney General William J. Schneider led an effort joined by 51 of their fellow state and territorial Attorneys General to call on the U.S. Congress to reauthorize the federal Violence Against Women Act (“VAWA”) and ensure that vital programs working to keep women and families safe from violence and abuse continue uninterrupted.

“The fight to protect women from violence is an ongoing battle, not a year-to-year issue,” said Attorney General Biden. “I urge congress to reauthorize VAWA so we can build on the lessons and achievements of the past 17 years and reach the millions of individuals and families who continue to need these life-saving services.”

Carol Post, Executive Director of the Delaware Coalition Against Domestic Violence, also stressed the importance of reauthorization. “The Violence Against Women Act has been truly transformative and has impacted every level of our society’s response to domestic violence, sexual assault and stalking,” Post said. “It is imperative that VAWA be reauthorized so that critical services for victims are maintained and vital partnerships with prosecutors, the courts and law enforcement are continued so that perpetrators are held accountable and victims are better protected from further abuse. The work will not be finished until we end the violence.”

In a letter VAWA-Letter-NAAG.pdf sent today to members of Congress, the Attorneys General state that since the initial passage of VAWA in 1994, the national response to domestic violence, sexual assault, dating violence and stalking has been transformed. Crimes that used to be considered private, family matters to be dealt with behind closed doors have been brought out of the darkness and the results have been dramatic. But while national rates of domestic violence have dropped by over 50% in the past 17 years, the issues addressed by VAWA are still very much at the forefront of the crime fight. Tragically, three women are killed each day in the United States by abusive husbands and partners, and for every victim who loses her life, there are nine more who narrowly escape. Attorney General Biden noted a recent tragedy in Delaware in which a young mother was beaten to death by her ex-boyfriend while her three children watched.

Citing the need to maintain services to victims and families on the local, state, and federal level, the Attorneys General called on Congress to pass legislation reauthorizing VAWA. They noted that reauthorization would not only allow existing programs to continue uninterrupted, but would also provide for the development of new initiatives aimed at key areas most in need of intervention. These initiatives include:
• Strengthening prevention and intervention programs. Domestic violence, dating violence and sexual assault are most prevalent among women aged 16-24. Programs will work to combat attitudes among youth which are tolerant toward violence and break the cycle in which women who experience abuse as teens are more likely to be victimized again as adults.
• Improving the response to sexual assault by ensuring coordination among the healthcare, law enforcement, and legal services a victim encounters after an assault to effectively prosecute perpetrators and help victims heal and rebuild their lives.
• Preventing domestic violence homicides by enhancing training for law enforcement, advocates, and others who interact with those at risk. A growing number of experts and researchers agree that these homicides are predictable – and therefore preventable – if we know the warning signs.

The Attorneys General closed their letter to Congress by recalling that when VAWA was first passed in 1994, it was recognition that domestic violence, dating violence, sexual assault and stalking are pervasive issues affecting individuals, families and communities across the nation. They note that the progress that has resulted from strong federal support has been tremendous, but that the struggle goes on. Reauthorizing VAWA, Biden wrote, will send a clear message that this country does not tolerate violence against women and show Congress’ commitment to reducing domestic violence, protecting women from sexual assault and securing justice for victims.

The legislation to create a civil stalking statute was prefiled for introduction in the 215th Legislative session that began January 10, 2012.  The new assembly bill number is 762.   Prime sponsor is Assemblyman Barnes with Assemblyman Caputo as a Co-sponsor.  The bill was referred to the Assembly Judiciary Committee. The legislation is detailed on the following link
http://www.njleg.state.nj.us/2012/Bills/A1000/762_I1.PDF

Excerpt from the 2009 NIJ Panel Discussion printed below; to listen or read the panel discussion click here
http://nij.ncjrs.gov/multimedia/transcripts/nijconf2009-domestic-violence-custody.htm

Bethany Backes: So I’m gonna be very brief and just say that today we’ll be hearing about two ongoing NIJ-funded studies on custody evaluation. Both studies will be concluding within the year, and the final reports will be available and accessible through the National Criminal Justice Reference Service.
So our panelists today are Dr. Daniel Saunders, a professor at the University of Michigan’s School of Social Work; Dr. Chris O’Sullivan, who is a research consultant currently working with the New York Legal Assistance Group; and the honorable Dale Koche, Koch, sorry, a senior judge with the state of Oregon. And we hope that today is the start of many discussions on this topic. And at this time I just want to ask everyone to please turn off their cell phones or any electronic devices to vibrate or silent. And we’re gonna begin with Dan.
Daniel Saunders: Good morning, everyone. Hope you’re doing well. It’s good to be here with you. Thank you, Bethany, thank you for putting this panel together and for your introduction. And I wanna commend NIJ for making this move into a new area — the family law side of the law.
In the early days, the focus in helping survivors of domestic violence was to make sure that offenders were arrested just like any other offender and that there were restraining order laws and that we had good stalking legislation. And it’s been only fairly recently that advocates and researchers have become aware of the horrible injustice when survivors finally escape from domestic violence and then are faced with continued stalking, harassment, abuse and then, low and behold, the worst trauma that survivors, I think, can ever go through is to get that piece of paper in the mail that says your partner, your ex-partner wants custody of your children. And so the trauma is multiplied times three where women — it’s usually women — are faced with sometimes losing custody to a person, they believe, will continue their abuse — abuse of the children, abuse of them.

Comment by NJ antistalking advocacy:  Hallelujah for Dr Dan Saunders and the Dept of Justice for documenting and exposing the abuse of the family court system aka stalking through the courts.  For ten years I was repeatedly served with motion papers that accused me of suffering from a multitude of mental illnesses and alleged that I fabricated being stalked.  I had good judges who put a stop to the abuse and I had one awful judge who allowed the abuse to occur inside and outside the family court room for two years because he felt that he should re litigate everything.  This judge allowed an attorney to ask that I be put in jail each time that I did not take my son to a psychiatrist.   My son is not crazy and I am not crazy - and the man who was leaving me threatening voicemail messages 24 hours before and 48 hours after a family court hearing - the same man who interrogated my son for 3 hours at his Eagle Scout Board of Review asking my son if this was a vendetta and quizzing my minor child about family court hearings is dead.

If you are being stalked through the family court start advocating for yourself and your children.  Not everyone will listen or help but you will be surprised that there are good people who will not stand for the injustice.  File an ethics complaint against the attorney who is filing the vexatious motions.  File a complaint against the psychologist who is writing a report about maternal passivity and parental alienation.  This is a lengthy process and very draining but you are in the fight for your life and the well being of your children.  Fight the good fight and eventually you will win.
Posted by Karen at 10:20 AM No comments: 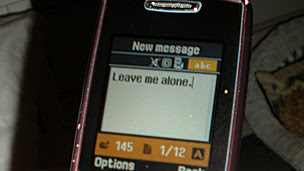 Stalking, due to modern technology, is believed to be on the rise

A new medical service for England and Wales specialising in treating stalkers is due to be launched.

The National Stalking Clinic is believed to be the first of its kind in the world.

According to the British Crime Survey one-in-five women and one-in-10 men aged 16 or over have been victims of stalking in its various guises.

Dr Frank Farnham, a consultant psychiatrist who has helped set up the new service, said: "If we can treat stalkers, then we can save lives.

"There is great need for a co-ordinated national service that can provide specialist advice and treatment.

"The psychological impact on victims is corrosive, with many suffering months and, in some cases, years of harassment leading to a variety of illnesses including anxiety, depression and post-traumatic stress.

Our correspondent said offenders who made unwanted phone calls, sent unsolicited emails, followed or harassed the objects of their affections were usually subject to restraining orders.

But under the new approach courts will be able to refer stalkers for assessment, treatment and rehabilitation.

They will be dealt with by a team of medical experts based at Chase Farm Hospital in Enfield, north London.

Doctors running the service say an 18-month course of treatment will cost up to £10,000 but they claim it will be cheaper and more effective than a short prison sentence.

But Dr Farnham said a typical assessment could cost between £1,500 and £2,000 and would be paid for by the court which sentenced the individual.
'Devastating'
Alexis Bowater, chief executive of UK charity Network for Surviving Stalking, said: "The launch of this clinic is a groundbreaking move and makes the UK one of the world leaders in tackling this devastating crime.

"The treatment and rehabilitation of stalkers is vital if we are to stop lives being lost to stalking."

Home Office minister Lynne Featherstone said: "I'm pleased to support the launch of this unique clinic that aims to prevent stalkers from reoffending.

"I've made stalking one of my priorities and it's included in the government's report Call To End Violence Against Women and Girls.

"We're also asking people for their views on how the police should tackle this devastating crime and whether current laws are adequate," she added