National Domestic Violence Awareness Month, 2008 A Proclamation by the President of the United States of America

White House News
Our Nation has a moral obligation to work to prevent domestic violence and address its brutal and destructive effects. During National Domestic Violence Awareness Month, we underscore our commitment to helping individuals across our country who face such devastating violence.
My Administration remains dedicated to eradicating domestic violence and helping victims find the compassion, comfort, and healing they need. In 2003, I announced the creation of the Family Justice Center Initiative to help local communities provide comprehensive services at one location for victims of domestic violence. In 2006, I was proud to sign legislation that reauthorized the Violence Against Women Act to improve criminal justice responses to domestic violence, sexual assault, and stalking. The Department of Justice's Domestic Violence Transitional Housing Assistance Program also offers victims of violence counseling and transitional housing services so they can escape the cycle of abuse.
During this month, we rededicate ourselves to protecting vulnerable members of our society and ensuring domestic abusers are punished to the full extent of the law. We encourage victims of domestic violence and their families to seek assistance through Family Justice Centers and the National Domestic Violence Hotline at 1-800-799-SAFE. Together, we can help heal hearts and build a culture in which all Americans can pursue their dreams and realize the great promise of our Nation.
NOW, THEREFORE, I, GEORGE W. BUSH, President of the United States of America, by virtue of the authority vested in me by the Constitution and laws of the United States, do hereby proclaim October 2008, as National Domestic Violence Awareness Month. I urge all Americans to reach out to victims of domestic violence and take action to make ending domestic violence a national priority.
IN WITNESS WHEREOF, I have hereunto set my hand this first day of October, in the year of our Lord two thousand eight, and of the Independence of the United States of America the two hundred and thirty-third.
GEORGE W. BUSH
Posted by Karen at 1:24 PM No comments:

Good things come to those who wait.... the next Senate Voting Session is now November 24th and then the Assembly voting session will follow on December 15, 2008.
Posted by Karen at 1:00 PM 1 comment: 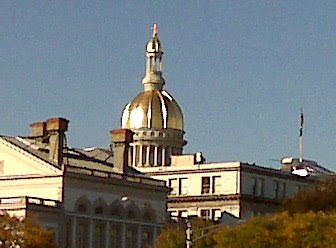 One step closer....the Amendments were unanimously approved by the Senate today 34-0. The entire bill will be voted on by the Senate in their next voting session scheduled for Nov 24th.
Posted by Karen at 10:22 PM No comments:

What I have learned over the past years in dealing with the stalking and now getting the legislation passed is that life deals twists of fate when you least expect it....Tuesday morning when i checked the board list for the Senate voting session on Oct 23rd I was disappointed to not see S1106 up for a vote as promised. Senator Beck's office didn't understand it either. I left a message with Senate President Codey's office early in the morning. By 3:45PM not hearing back about the legislation I phoned Senate President Codey's Office and the phone was answered by a man saying "Governor Codey". I checked my cell phone as I thought I must have the wrong number but I soon realized my call was answered by the former Governor and Senate President himself. After getting over the shock of speaking with the former Governor, I explained that I was the woman with the open stalking case who had spoken to him at the NJBIA breakfast in September about the antistalking legislation and he had told me he would post it for a vote. Governor Codey immediately said let me see what I can do. An hour later I received a call from his aide telling me that the Governor asked him to call me back and he explained the minor Amendments and the bill need to be voted on separately. The amendments will be voted on tomorrow Thursday October 23rd and then on November 24th, the entire bill will be voted on. If all goes well, the bill will be ready for the Governors signature by Christmas! What a nice surprise. Tomorrow we are off to the Capital!!!
Posted by Karen at 9:09 PM No comments:

Fight the good fight and you will ultimately win 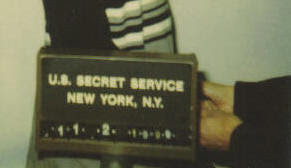 "Fight the good fight and you will ultimately win" I first heard this phrase from a secret service agent in 1999. You can't battle evil but you certainly can and should battle for the greater good. Since the stalking began on Christmas Eve in 1997, I have had so much help in this fight. You all have my deepest gratitude. You stepped in and helped when I needed it most and I will be forever grateful. 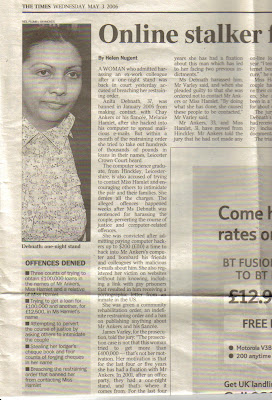 Stalking is a world wide and not gender specific crime. Here is an article from the London Times on a woman who stalked a male co-worker.
Posted by Karen at 9:31 AM No comments: