Governor Christie, We NJ women and mothers currently suffering through a corrupt family court system implore you to ask the USDOJ to investigate the family court.   I thought that I had seen it all.  I thought that I had endured it all. My divorce was final in the mid 1990’s.  Over the course of the next 15 years, I was criminally stalked and stalked through the family court. The FBI got involved in my case in 1999 after I was stalked to and received calls to my hotel room on my birthday from an individual using the voice changer from the movie Scream to sing Happy Birthday to me.


Beginning in 2000, I was dragged to the family court by an attorney in violation of a judgment of divorce that required mediation before going to court on a child related issue.  In court in 2001, the criminal stalking was used against me to paint me as unstable in an attempt to take my child away from me.  In 2007, another motion seeking custody of my child was filed.  Judge Guadagno resolved the matter entirely in my favor and his decision on the illegal subpoena of police reports I filed to document my stalking became a published opinion. In 2008, Judge Guadagno was transferred to another county and the motions began again under a new judge.  My decade long criminal stalking case was the impetus to update the NJ criminal stalking statute to incorporate third party stalking and elevate the level of the crime.  In 2009, Governor Corzine signed my legislation (A1563) into law.  Around an August 2009 family court hearing meant to resolve all issues I began to receive recorded threats deemed credible by the FBI.  Joe Pate, the suspect in my federal stalking case admitted to the FBI and police he was stalking and threatening to kill me and then Pate committed suicide to avoid federal prosecution.


Investigation Discovery Channel filmed a documentary on my 10+ year criminal stalking case entitled Stalked: Someone’s Watching “Dangerous Games”.   After the documentary aired NJ women with similar cases of criminal stalking and stalking through the family court reached out to me.  Through them I learned the family attorney dragging me to court for a decade had a baby fathered by a family court judge.  I realized the judge who presided over my case in 2001 was none other than the baby daddy of the attorney who dragged me to court.  The ethics case against this attorney has been pending  four years after being remanded twice by the NJ State Disciplinary Review Board.   The Advisory Council on Judicial Conduct declined to investigate the judge because he is retired.  This Judge and this attorney had an open relationship in the court house.  In violation of court rules, the court order for the hearing where the Judge’s baby mama attorney appeared before him neglected to include the attorney’s name.  On August 21, 2013, I began asking to inspect my file and get a copy of an order from the first hearing where the judge’s baby mama appeared before him in my case and according to Elisabeth Strom the acting clerk for the Superior Court, my file has gone missing. 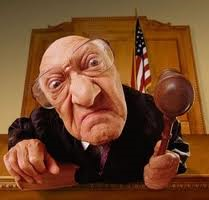 NJ is run amuck with corruption in the family court.  Good mothers are losing custody of their children and filing for bankruptcy because of unethical attorneys and corrupt judges.
Please Governor Christie – we implore you to call for a Federal investigation into the family court corruption.